Akane Yagyū, the current Jubei, is the granddaughter of Jūbei Yagyū. She has the ability to fit into small holes and walk on thin bridges opening many inaccessible areas to the group.

Akane is a young woman around the age of 14 with exceptional skills who carries the Jubei namesake and Yagyu Sword. She possesses the demon eye, rare even among the Yagyu clan. Prior to the beginning of the game itself, Akane is assigned the duty of hunting down her uncle, Munenori Yagyū. Munenori's heinous acts in betraying and killing members of the clan are the reason Akane accepts the task, relentlessly seeking to capture or kill her kinsman. However, she struggles to defeat Munenori throughout most of the game and ends up getting captured twice, used a bait once, and nearly killed once.

Both Munenori and Akane (near the end of the game) are depicted wearing eye patches to cover their demon eye. This is likely a reference to the widespread image of the historical Mitsuyoshi Yagyū as wearing an eyepatch. She is kind, un-lady like and is known to give nicknames to some of the members of the group such as "Blue" for Hideyasu Yūki. At one point in the game, Akane is confused as to whether she is romantically interested in Sōki, or he is just her elder 'brother'. Though later in the game, she regrets coming in the way of Soki's and Ohatsu's love. Her idol is her grandfather (Jūbei Yagyū) Seikusyusai Yagyu is the founder of the Yagyu Clan. Shikomizue swordsticks are her main weapons.

Artwork of Akane from Onimusha: Soul. Note the Oni Gauntlet on her right arm. 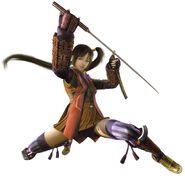