The Brahma is a spear whose powers grow quickly with the infusion of red souls. It boosts the user's max HP, but can't grant Oni Magic. 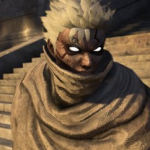