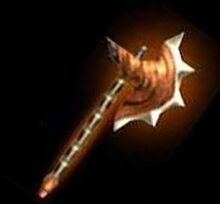 The Chigo (地轟斧, lit. Earth Shake Axe) is a giant earth-elemental axe that brings forth lava, obtained in the Oni Underwater Temple. It is the final in Onimusha 3: Demon Siege and the most powerful weapon that Samanosuke Akechi will find, with exception of the weapons found at the final battle. Found as an orb in the underwater temple, it is very powerful and is the shape of a large burnt-orange axe. It has the power of earth and its magic attack is capable of creating volcanic eruptions, in a manner similiar to the earthquakes of the Warhammer found in Onimusha 2: Samurai's Destiny.