The Dokoutsui (土荒槌, lit. Earth Barren Hammer) is an iron hammer with the power of earth. Despite being the slowest of Jūbei's weapons, it's also the most damaging and can cause heavy knockbacks. It is the best counter for some of the slowest, biggest and toughest monsters in the game. Jūbei can obtain this weapon from the Dragon Shrine inside the Oni Island, in the first chamber.

Jūbei leaps and pounds the soil with the hammer, knocking all the enemies in a huge radius around Jūbei, pretty much allowing him to pretty much damage everything in the room and it does have a low cast time like the Hyoujin-Yari. 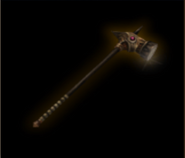 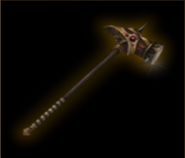 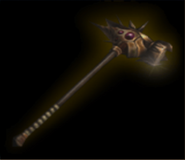