Ekei Ankokuji (安國寺 惠瓊 Ankokuji Ekei) is a master spear fighter in the Houzouin style. He is a monk who loves money, liquor and the company of beautiful women. Before entering monk hood, he once served a warlord who lost a terrible battle against Nobunaga.

Ekei lost everything, including his beloved family. He appears sensitive to little children as he also had a daughter who died during the collapse of his clan. In the game, he is eager to marry a young woman, so he can have a child, and become a feudal lord so that his child can live a life of happiness; the same that he promised his daughter when she was born. He claims that he would do anything to accomplish this dream, even serve Nobunaga. Magoichi upsets him when he laughs at Ekei's dream, claiming it to be 'silly'.

Near the beginning of the game, when Jubei is in the gold mines, he and Ekei fight off a group of demons while Magoichi decides to sit back, not wanting to be involved (depending on who you're more close with in the scenario, it'll be Ekei who decides to sit and drink while Jubei and Magoichi fight). The trio then encounter a man, who begins pleading with them to resuce his daughter who has just been kidnapped by demons. Ekei, thinking the man's daughter might be a beautiful young woman, then decides to rescue the daughter. Magoichi decides to follow Ekei, in case he might get himself in trouble.

When Jubei arrives at Gifu Castle, he and Ekei save a young baby girl from a group of demons. When the daughter's father arrives to take her, it is revealed that the daughter belonged to Ekei, who believed she perished in flames while he was trying to rescue her from the burning castle. Knowing he can't take care of her, he gives her back to the villager, begging him to take good care of her.

In one of the two endings, based on the friendship with him, which in this instance is the bad ending, Ekei ambushes Jubei, telling him that if he (Ekei) brought Jubei's head, Nobunaga would make him a feudal lord. After the battle, Ekei repents for what he's done, losing his family and living up with women and booze before dying with a smile. In another ending, with great friendship, he says that he found a feudal lord, Motonari Mōri (named viceregal feudal Mouri in the game), to battle with. He then he goes away. 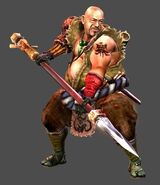