The Enryuu (炎龍剣, lit. Flame Dragon Sword) is a fire-themed western broadsword that is coupled with the Kōen Orb of fire. Appearing in Onimusha: Warlords, the Enryuu is slower than the Raizan but makes up for it with greater attack power. Its magic attacks allows Samanosuke to project a forward blast of fire that strikes all opponents in front of him. In Onimusha 3: Demon Siege Samanosuke starts with this weapon but loses it after being flung into the present day. The weapon has also appeared in Onimusha: Dawn of Dreams, where it can create an attack wave at base level, increases damage against Ice enemies by 50%, and increases the user's max HP by 1000 at max level. 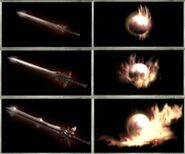 Enryuu in Onimusha: Dawn of Dreams.
Community content is available under CC-BY-SA unless otherwise noted.
Advertisement