Similiar to the Dark Puppets, the Fobora wear modern Western style armour, and have been resurrected by the spells of the Genma king. Inhabited by a red flame, this flame can also be conjured and fired as a projectile, which can also be deflected back to cause immense damage.

Another variant of these enemies, the Nerofobora, have a blue flame rather than a red one, and only appear during the boss fight with Guildenstern. When they are defeated, their armour collapses and then is easily resurrected by Guildenstern, hence their name "Nero" which is a derivative of "Necro" which means Dead. 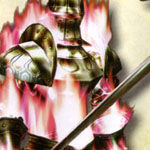