The Genma (Japanese 幻魔) are a race of demons and the primary antagonists in the Onimusha series.

They were born out of chaos by the demon god Fortinbras, who also created mankind for the Genma to prey upon. They were later embroiled in a great war with another mystical race known as the Oni, where they succeeded in defeating their rivals and devastated their numbers.

The Genma are a diverse race of creatures that come in all manner of hellish forms. Some are naturally occurring phenomena, whereas others have been manufactured by demon scientists, most notably the eminent Guildenstern. Most Genma only follow a basic level of intelligence, with an instinct for death and destruction. However, there are rare breeds of Genma who possess their own cognition and personality. There are also cases of humans who have been resurrected as Genma, such as the infamous demon lord Nobunaga Oda and his vassal Ranmaru Mori. 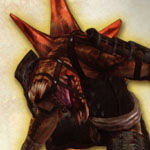 A Bazuu
Community content is available under CC-BY-SA unless otherwise noted.
Advertisement