Hecuba (ヘキュバ) is a boss character that appears in Onimusha: Warlords and Onimusha: Blade Warriors. A rare intelligent Genma.

Hecuba presents herself firstly as a young human woman. She first appears just after Samanosuke has rescued Yumemaru. She claims her name is Nui, saying she serves Princess Hatsu. She tells them that Princess Yuki is underground. She then faints and is left to be looked after by Kaede. Later on, Stylado comes to where Hecuba has been with Kaede and Yumemaru. Hecuba grabs Yumemaru and Kaede is knocked out by Stylado.

Once Samanosuke has acquired the evil plate and places it in the door. He comes across Hecuba again. She reveals her true form; a giant mantis like insect. She also erects a massive doorway to the demon world and flies through it, taking Yumemaru with her.

Her final appearance is when Samanosuke fights her. He is locked in a building and is surrounded by insect like Genma. She comes flying through a wall and informs Samanosuke of the Genma's Dark ceremony.

Hecuba makes a cameo during the opening scene, where she is shown with the other demons resurrecting Nobunaga prior to the events of the first game.

Hecuba can appear as a sub-boss during the hero story mode. She uses similar attacks to her Onimusha: Warlords, swiping with her claws and using her stinger. She can also launch purple spheres of energy at the opponent as her charge attack. She appears on the stage "Three Stage Pagoda".

In the 21st century, both Michelle and Samanosuke come across numerous paintings of various Genma in Boulonge Zoo, Hecuba's among them placed there by Guildenstern within the research center. It's possible he set up the gallery as tribute to his fallen Genma and creations.

Hecuba is one of the rare intelligent Genma, more powerful than the common breed of Genma. She has the ability to shape shift from her true form to a human one. This allowed her to come face to face with Samanosuke and Kaede without arousing suspicion. In her true form she has rapid flight power, strong enough to blow floorboards up from the floor and fly at great speeds. She possess two scythe like arms similar to that of a praying mantis. She uses these to attack Samanosuke with swift and powerful swipes. Hecuba has a wasp-like abdomen with a large stinger she will use to attack Samanosuke with. She also has the power to summon smaller insect Genma. 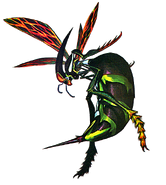 Hecuba before she transforms