Soki Oni Of The Ash

Hideyasu "Sōki" Yūki is the main protagonist in Onimusha: Dawn of Dreams. He was the biological son of Ieyasu Tokugawa and a warrior who possesses the dark power of the Oni. He goes by many names besides Sōki and Hideyasu Yuki; Blue Demon and Oni of the Ash. Having Lamentation, his prized broadsword he learned about Hideyoshi's insidious scheme, he sets out on a journey to burn the Genma trees and defeat the Genma running rampant across the land.

Wielding two swords with such grace, precision and power, Hideyasu is soon referred to by townsfolk as "Kaijin no Sōki", Oni of the Ash, due to his extreme resemblance to the Oni God and as attribute to the ash of the trees he burns. Sōki's travels are aided by a young creature by the name of Minokichi. He provides Sōki with instant "teleported" travel, insight on the various creatures & places they traverse, and quips about the allies they eventually obtain

Soki is one of the Oni warriors and a reincarnation of a Oni god. The game begins with Soki on a quest to locate and destroy the Genma trees that Hideyoshi Toyotomi is using to gain power. Soki is challenged by the Genma samurai Danemon, whom he easily defeats. Later, he teams up with Akane Yagyu, granddaughter of Seikusyusai Yagyu (protagonist of the second game). During an attempt to destroy more Genma trees, Soki and Jubei meet up with Munenori Yagyū, Jubei's uncle and intended target and Ohatsu, Soki's childhood friend and daughter of Oyu. Ohatsu tries to convince Soki to come back with her, but Soki refuses. Ohatsu then leaves with Munenori while Soki saves Jubei from Munenori's trap.

Later, soki and Jubei meet up with a mysterious monk named Tenkai who tests them to see if they are Oni warriors. He joins them shortly before the battle with Buzz Mantis. Tenkai tells Soki of a Westerner named Roberto Frois that they need to defeat Hideyoshi however, when they find him, they end up fighting him. Soki joins up with Ohatsu but she once again leaves with Munenori leaving Soki to suspect something may be forcing Ohatsu to stay on his side. He confronts Mitsunari Ishida and Luis Frois on Hideyoshi's behavior but is interrupted by Roberto who intends to kill Luis. Soki and Roberto fall through a trap door set by Mitsunari and are forced to fight an insect-like Genma, after which Roberto joins them.

The Oni warriors then decide to destroy the Genma Mother tree but everyone but Tenkai is distracted by their own personal vendettas, with Soki rushing off to stop Hideyoshi. When Soki finds Hideyoshi, he begs him to stop the ongoing war but Hideyoshi refuses, saying that the Toyotomi clan will rule the world with the power of the Genma and asks Soki to join him. When Soki refuses, Hideyoshi then sends four Genma Generals to kill him, but they are easily defeated when Soki unleashes the power of the Oni.

Soki then has to fight Hideyoshi himself, but is no match for his power. Soki then escapes with Ohatsu while Tenkai attempts to fend off Misunari, who is seemingly enveloped in the blast Mitsunari had created. Soki and Ohatsu arrive at Mt. Hiei when Ohatsu collapses in pain, revealing that she only followed Munenori's orders because of the Genma insects inside her body, but now that she betrayed them for Soki, they were devouring her. Ohatsu is then taken away by a mysterious girl who tells Soki that the only way to save her is to become an Onimusha.

Soki then fights his way up the Oni Mansion to save Ohatsu. At the top, he battles the previous gatekeeper and defeats him. At first it seemed that Soki didn't make it in time, but he emerges from the Oni gate just in time to destroy the Genma insects that had begun to take over Ohatsu. After Ohatsu recovers, they go to save Jubei, who has been captured by Munenori. They save Jubei, but Munenori manages to escape after revealing his Demon Eye. Next they go off to save Roberto from Luis Frois at the San España Hospital but when they are surrounded by Genma, Luis goes through a sudden change and begs them to take Roberto to safety and leave. 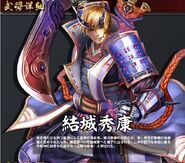 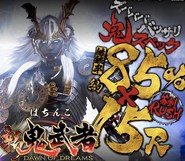