Jūbei Yagyū is the main hero of Onimusha 2: Samurai's Destiny. As the first leader of the Yagyū clan seen in the series and originator of Shin-in style sword combat, he was born as Sougen but later given the name Jūbei as a child, a tradition which would continue as seen with his granddaughter. His father was the late Head of the Yagyū clan, who was seduced and had a child by a woman who disappeared shortly thereafter. Jūbei never knew his mother.

After a period of solitary training, Jūbei sensed an ominous feeling and returned to Yagyū village to find it destroyed, without any survivors. Shortly afterwards, he was beckoned by a strange Oni woman called Takajo, who introduced herself as Jūbei's mother. She told him about his Oni lineage and that Nobunaga Oda and the Genma were behind the attack. Jūbei goes to Imasho, a place between Nobunaga's Mino, Azai Nagamasa's Omi and Yoshikage Asakura's Echizen.

While in this town Jūbei meets Ekei Ankokuji, Magoichi Saiga, Kotarō Fūma and Oyu, and over the course of the game, forms a realtionship with all of them. Jūbei embraced his Oni powers and eventually defeated Nobunaga in a climactic battle. But this Jūbei's actions only slowed down Nobunaga's scheme as he lacked the means to contain the warlord's Genma spirit.

During the events of Onimusha: Blade Warriors, Jūbei meets Kaede in the Mist Valley, Imajo Village and Samanosuke Akechi at the Silver Grass Plain.

In Onimusha 3: Demon Siege it was reported that Jūbei had gone into hiding after Hideyoshi Hashiba sent ninjas after his head. It mentions that Jūbei was spotted leaving on a ship to the West. It was also said that Jūbei was spotted traveling with Oichi near Omi province, but this rumour was dubious. Jūbei is also mentioned by Nobunaga Oda when Samanosuke confronts him during their final battle, telling Samanosuke that not even Jūbei Yagyū could destroy him, and that Samanosuke's attempt will also fail.

Jūbei does not appear in Onimusha: Dawn of Dreams and he is now an elder of Yagyū village. Once again challenging the demons, he sent his young granddaughter Akane to assassinate his corrupt son Munenori Yagyū, who has allied himself with the Genma. 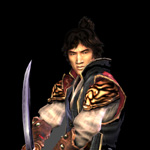 The mark that allows Jubei to absorb souls

Jubei with Oyu after Tokichiro escapes with the Oni Genbu

Samanosuke and Jubei at the Silver Grass Plain 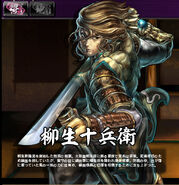 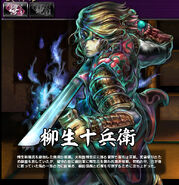 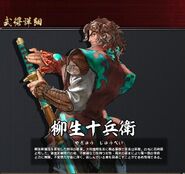 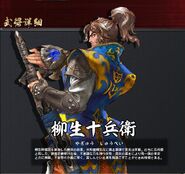