Jacques Blanc is one of two main protagonists (the other being Samanosuke Akechi) in Onimusha 3: Demon Siege. This is also the first game in which a Westerner wields the Oni Power.

Jacques' likeness is that of the French actor Jean Reno. Reno performed the French voice talents for his character as well. However, due to his busy schedule at the time, he couldn't do the English voice work. Another voice actor, Paul Mercier, did the work in Reno's place.

Jacques was born in 1968, which makes him 36 at the time of the Genma invasion. He was raised in Paris, and is currently a member of the Direction Generale de la Securite Exterieure's (General Directorate for External Security), under the 29th SA Operations Division of the French Military, an elite squad whose specialty is covert operations. Jacques' favorite weapons is his FN P90 custom submachine gun and his .45 automatic pistol. He is also an avid lover of motorcycles and owns one as well.

Jacques is extremely intelligent and is also a top athlete. He is currently one of the unit's top members. Along with Jacques, his best friend Phillipe is also a member, along with First Lieutenant Michelle Aubert. He is also a widower with a ten-year-old son named Henri. His wife died in a car accident while protecting their son. As a result, Jacques and Henri share a bond strong enough for Henri to realize when his father is in trouble. However, Henri doesn't like the fact that he is dating Michelle, and isn't afraid to show it.

While placing a call to his son Henri, Jacques gets a call from Phillipe on his radio, requesting backup. The Genma clan's invasion of Paris has begun and the Genma soldiers are killing every human they can find. Jacques rides his motorcycle and rushes off to help in repelling the demons. As Jacques rushes to Phillipe's aid, Phillipe's squad is currently engaging several Genma in the streets. The squad is wiped out and Phillipe is seriously wounded. When all is lost, Jacques wiping out several Genma with his bike.

Armed with an FN P90 submachine gun, Jacques hold the Genma at bay until he is out of ammunition. Just as things seem bleak for Jacques and his friend, a third person - a Japanese man wearing red samurai armor - emerges from the nearby alley. Armed with his katana, the newcomer quickly dispatches the Genma with ease.

The samurai is Samanosuke Akechi, the Red Oni, who was brought to modern-day Paris due to the Genma scientist Guildenstern's experiments in time rifts. Puzzled as to why a samurai is in Paris, Jacques and Phillipe both find themselves caught in a time rift and are warped back to 1582, much to Samanosuke's dismay.

Jacques and Phillipe then appear in a empty Forrest. Unfortnately Philiipe dies from his injuries and Jacques wishes his friend to rest in peace. He explores the Forest, and then hear's his son screaming. He sees his son and a Genma nearby, he tries to use his handgun but runs out of ammo and doesn't affect it. In a last ditch effort to save his son, he charges the Genma but is knocked away easily. Just then Oni Gauntlet appears on his arm and is granted the power of the Oni. He then successfully defeats the Genma with this new power.

The pathway is filled with Genma, even Genma weeds block the path. Finally, Jacques makes it to his destination: Lazuline Hall. Inside the hall is Ranmaru Mori, who insults Jacques by calling him a 'Western Barbarian.' He then sends the monster Marcellus on Jacques. Once an Oni warrior who was killed in battle, Guildenstern performed experiments on Marcellus' body and twisted it into becoming a Genma warrior. Like Samanosuke, who thrashed Marcellus twice twenty years ago in his search for Princess Yuki, Jacques defeats him as well.

Jacques then notices several crates filled with various items, one of which contains a wristwatch from his own time. Ako notices the insignia, which is that of the Sakai merchant. Wondering as to why modern items are in feudal Japan, Jacques heads over to Sakai to investigate. Upon arriving at the port city, he confronts the merchant, whose response is to throw him out of the shop. Jacques sneaks back inside and discovers that the merchant was storing various modern items for the Genma.

When Jacques exits from the store, the town is under attack by the Genma. When Jacques arrives at the harbor, he finds more modern items such as tires and appliances all over the place. A Genma vessel disguised as a Western ship is docked, but not for long. Also at the harbor is Heihachirou Tadakatsu Honda, a secret servant to Ieyasu Tokugawa, the future leader of Japan. Heihachi is the master of the Dragonfly Slicing Spear. Unfortunately, he is on the side of the Genma clan, but has no wish to kill Jacques. The Westerner and the spearman fight to a standoff.

After Heihachi departs, the Genma ship begins to leave port. Jacques sees his motorcycle nearby and upon inspecting it, sees that he doesn't have the spare keys for the bike. Ako offers to go to the present and retrieve the key for him, which she does. Upon returning to Jacques, she says that Henri had the key ready for her when she arrived. Jacques takes off on his bike and catches up with the Genma ship. Jacques slaughters the Genma on board and heads below deck.

The ship is apparently on autopilot, and also watertight, since it can travel underwater. When the ship emerges from the waters, Jacques exits the vessel and finds himself in some kind of underwater temple of sorts. Inside the temple, he encounters Ranmaru once again. This time, Ranmaru sends a number of Genma soldiers after Jacques, who gets rid of them with ease. On his way out of the temple, Jacques encounters the temple's guardian: a two-headed Genma guard dog named Gertrude.

Once Gertrude is defeated, Jacques reaches a Genma escape train. He boards it and the train takes off. Exhausted from exploring the temple and the ensuing fight with Gertrude, Jacques decides to rest for the duration of the genma train ride.

Jacques, now rested up, arrives at Mont Saint Michel, a French monastery located on the coast of Normandy, now transformed into a Genma's stronghold. He also finds Heihachi waiting for him. Watching the ensuing battle is Nohime/Vega Donna, Nobunaga's mistress. She orders Heihachi to finish Jacques off, but the spearman refuses and walks off. Nohime/Vega Donna chases after him.

The Frenchman frees the prisoners and sees Heihachi changes sides. Once he finishes cleaning up the Genma's mess, he hitches a ride on the mobilized fortress of Azuchi Castle - which destroys Mont Saint Michel when it lifts off - and lands around Lake Biwa in Japan. There he reunites with Samanosuke and they cross the treacherous lake, filled with floating pieces of ice and various types of Genma. They make it to the other end of Lake Biwa and approach the Oni Mansion. Inside the establishment is a special Orb that Samanosuke can use.

Jacques is successful in obtaining the Oni Army Orb. He catches up with Samanosuke near Azuchi Castle and hands him the orb. Samanosuke uses the orb to summon an army of Oni warriors, and just in time too, since a welcoming committee several thousand Genma swordsmen and archers are heading their way. While Samanosuke controls the Oni warriors, Jacques leaps into the fray, leading the Oni warriors across the battleground. He reaches Azuchi Castle and on the top floor, is Nohime/Vega Donna, who has been waiting for him.

After Vega Donna is killed, Jacques finds Heihachi. The spearman has fallen into one of Ranmaru's traps and is badly wounded. In great pain, Heihachi dies and Jacques swears vengeance. By this time, ten days has passed and Samanosuke, along with Jacques, arrives at Honnoji Temple. At the top of the stairway, is the burning temple itself and Ranmaru is outside waiting for them. Jacques tells Samanosuke that he will deal with Ranmaru and proceeds to beat Nobunaga's page to death with his bare hands, thus avenging Heihachi.

Inside the temple, is Nobunaga. Jacques fights him and defeats him by tossing him into the blazing flame surrounding the temple, thus earning his way back home. As Jacques watches from the time rift, Nobunaga himself rose from the flame and attacks Samanosuke, thus killing him, which is the last thing that Jacques sees before he is transported back to Paris. When Jacques returns home, he finds himself at the Eiffel Tower, and Paris was regained in its peaceful state, the Genma's onslaught never occurring.

Samanosuke, Ako, Michelle and Henri are also there. Upon arriving, Jacques warned Samanosuke that his 'younger alternated' self is no longer alive, resulted by Nobunaga's ambush. Ako has already filled Samanosuke in on the details and Samanosuke prepares for the final duel against Nobunaga. The Red Onimusha bids his friends farewell and he and Ako return to their own time via the incoming time rift.

As the three depart from the scene, Jacques notices that Henri has warmed up to Michelle. Unfortunately, Ranmaru Mori, having been infused with Genma blood, amidst of his fatal injuries at the hands of Samanosuke, attacks Henri from behind. Jacques cries foul and destroys Ranmaru with full rage, but the damage has been done. Henri dies from his injuries, but thanks to the powers of Jacques' Oni Gauntlet, Henri is revived. Jacques silently thanks the Oni Gods for bringing his son back to him as he and Michelle hold the young boy in their arms, as they disappear into the crowd of the peaceful night of Paris.

Jacques' outfit consists of a shirt and a blue SA trenchcoat. The coat is bulletproof and serves as armor for the members of Jacques' unit. A utility belt in which he keeps spare magazines for his handgun is around his waist. A pair of fatigue pants and combat boots complete the outfit.

Jacques starts with his P90 and later switches out to his Oni Whip as his default weapon. He will retain his handgun to be used in conjunction with his Oni weapons he would acquire over the course of the game.

Jacques is granted the power of the Oni Gauntlet after a Oni Spirit grants him the power. With this the Gauntlet provides the following powers to him. 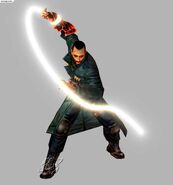 Jacques with the Raisen 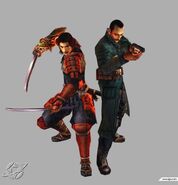 Jacques and Samanosuke before they use the Oni Army Orb

Jacques and Samanosuke form a team

Jacques gets his Oni Gauntlet and Oni Whip

Jacques with his pistol