Jujudormah is a Genma serving as a concubine for Lord Nobunaga Oda. She is an old and rather unattractive Genma obsessed with Lord Nobunaga, even when it is obvious the feelings aren't mutual. She was also responsible for the death and murder of Jūbei Yagyū's mother, Takajo.

Self-deluded, vain, and obsessed with her self-proclaimed "good looks", she is flung into a rage when Jūbei tracks her down in her lair and calls her a "nasty thing", causing her to scream so loudly she shatters the mirror of her vanity desk. She is armed with a handbag equipped with a curved blade and a parasol that shoots powerful magical blasts. She is in a bit of a rivalry with Ginghamphatts as to who can kill Jūbei first. She appears in a later game Onimusha Blade Warriors, as her younger, more attractive self as Juju-Ran.

As JujuRan, her younger, slender, and more attractive self, she carries the same umbrella as her old self but uses a sword instead of using the umbrella to attack. She believes she can subdue any man, and like her older self, has her eyes set on Nobunaga. 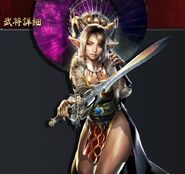