Leader of the Fūma Ninja clan
Agent of the Hōjō clan

Kotarō Fūma (風魔 小太郎, Fūma Kotarō) is the young Chief of the Fūma Ninja Clan, who is in service to the Hōjō Clan. He confounds his opponent with his agile movement and countless Ninjutsu.

Kotarō's childhood has been stained by the experience of being abandoned by his mother; which has caused him to distrust women. However, it is wiped by Oyu's caring and kindness.

Kotarō is introduced after Jūbei escapes Gifū Castle with Oyu, but can be found earlier in the story at the top of the inn, after talking to some villagers in Imasho. He warns Jūbei to beware of Oyu, and not to trust her. When Jūbei finds himself lost in a forest, Kotarō comes to his rescue after impersonating Jujudormah.

In the Oni's Sacred Place, Kotarō confronts Oyu and accuses of her of being a spy for the Oda Clan. He then warns her to stay away from Jūbei, or else. When she refuses to, he tries to kill her, but is knocked aside by a demon. As he is about to be killed, Oyu saves him and then tries to help, when he refuses her help. Oyu then inquires Kotarō about his past, thinking that his mother did not truly abandon him. Upset, he tells her to be quiet, and then flees.

As he lies on the ground dying, Kotaro finally reveals his past to Oyu. He wasn't abandoned by his mother, but she was trying to escape Fuma Village with him when he was a child, so he would not have to become a ninja and put his life on the line. The ninja of the village hunted them down, and killed Kotarō's mother, leaving him alone, which explains why he said she abandoned him. He then apologizes to Oyu for how he acted, and then dies in her arms, while remembering his mother.

Kotarō has a brief encounter with Kaede in the Bamboo Forest. 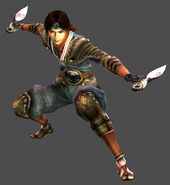 Kaede and Kotarō Fūma in the Bamboo Forest 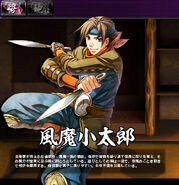 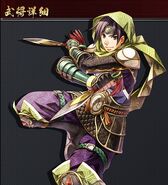 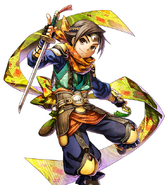 Kotaro Fūma as a child, Grade 7
Community content is available under CC-BY-SA unless otherwise noted.
Advertisement