Lady Yodo (淀殿, Yodo-dono) is the daughter of Oyu and Nagamasa Azai who became a royal concubine to Hideyoshi and gave birth to his son. She is also the older sister of Ohatsu and Oeyo.

Known as Cha-cha (茶々) in her youth, Yodo was oldest of three daughters born in the Azai Clan who were also the nieces of Nobunaga Oda through their mother Oichi. After Nagamasa's death, Yodo was placed in the care of Hideyoshi Toyotomi and eventually became his concubine. She later changed her name after giving birth to her son Hideyori Toyotomi.

When Hideyoshi aid the Genma Triumvirate in the resurrection of Fortinbras, believing he would be the god's vessel, Yodo was sacrificed to become the Mother Genma Tree while the Genma Ophelia disguised herself as Yodo and assumed her role in Hideyoshi's court.

In was only during the final battle that Yodo regained consciousness within the Mother Genma Tree to destroy Ophelia yet acted on an impulse to consume everything within her reach before she was restored to her human form by Hideyasu Yūki. After fleeing Fushimi Castle, Yodo now lives with her sister Ohatsu after her younger sister married into the Kyōgoku clan. 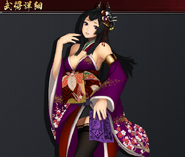