Luís Fróis (ルイス・フロイス Ruisu Furoisu) is a Portuguese missionary and well-respected scientist in Spain who came to Japan in the San Felipe. He was famed for his kindness; taking in orphans and cared for them as his own children.

According to history, Luis came to Japan during its Sengoku Period where he met and befriended Nobunaga Oda. When Luis later returned to Japan after Hideyoshi unified the country, he was tasked by Mitsunari Ishida to conduct research on the Genma. In the process, because of his high ranking status, Luis was possessed by Rosencrantz.

Luis was powerless to control his body as Rosencrantz forced him to use his adopted children as experimental test subjects. But, managing to muster enough will to regain control, Luis implanted the prayer beads into his last remaining child Roberto to give his ward the power to destroy the Dark Stones that are empowering Hideyoshi and stop the Genma. In time, believing his adopted father willfully killed his friends, Roberto learns the truth of Luis's possession. Luis eventually dies along with Rosencrantz at the Shimabara Research facility in the explosion caused by Claudius's death. 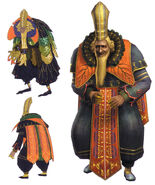