Magoichi Saiga, a marksman for the Saiga clan, is an aloof warrior with a great love for war and battle. He is also a book enthusiast and enjoys researching a variety of subjects. Despite his cold exterior, he is an honorable and loyal comrade, as can be seen when Jūbei Yagyū was petrified by Tokichiro and Magoichi fearlessly fought a horde of demons to save him.

Underneath his passion for battle, he truly wishes that Japan could live in a time of peace. He fights with a traditional Matchlock rifle, and can attack many enemies from long-range. Magoichi has a petty rivalry with the spearman Ekei Ankokuji‎ and the two are often found quarreling, but deep down they share an untold respect for one another.

In the story, it was believed that he was working for Nobunaga Oda in order to become rich. However, after Jūbei saves him in his hour of need, Magoichi reveals that he would not serve someone as nefarious as Nobunaga. It is revealed that Magoichi became an orphan when his mother died after giving birth to him, and was raised by the women of his village. Because of the love and generosity they showed him, Magoichi fights to protect his village from being destroyed by Nobunaga's army.

Towards the end of the game, he meets Jūbei for the final time, blows up Ginghamphatts with his new weapon Kuni Kuzushi, and tells him he must head back to his village, which will soon be under attack by Nobunaga's forces.

Magoichi battles Marcellus in the Ice Chamber and has a brief encounter with Kaede at the Ancient Castle (Moon). 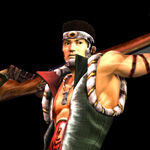 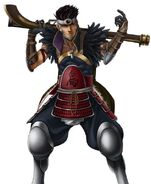 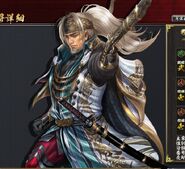