Marcellus (マルセラス) is a demon boss from Onimusha: Warlords. He was once an Oni Warrior that was converted into a Genma through Guildenstern's experimentation. This engineered demon, created from materials fetched from the Cave of Treachery, is Guildenstern's pride and joy. He wields a weapon resembling the Oni Gauntlet on his right arm.

Over 100 years ago, during the prolonged brutal warfare between the saintly Oni Race and evil Demon/Genma Clan, the Oni Warrior Marcellus, then a monk known as 'Murokoto', had long been a legendary fighter who fought alongside another Oni Warrior called Sougen Osho in this battle. He earned glory through his unique combat skill and by striking fear into the heart of every Genma with his possession of the divine orb of wind bestower upon him, Arashi.

His existence, now perceived as a threat to the Demon Clan, caught the attention of Genma God Fortinbras and his trusted minion, the Genma scientist Guildenstern. When he accepted Guildenstern's challenge to a duel, it turned out to be a setup by the scientist himself, which resulted in Murotoko's horrific demise. However, Murokoto's soul wasn't put to rest for good.

Murokoto's lifeless corpse eventually fell into the hands of the Genma clan. Thanks to Guildenstern's insidious ploy, Murokoto's corpse was experimented on and eventually resurrected into a mindless undead, only capable of following the Demon Lord's bidding. He was then renamed Marcellus, which means 'Ultimate Warrior Of The Genma's Legion', and was the most valuable asset of the genma clan, who manipulated him against his own race and his former allegiance, the Oni Clan.

Marcellus makes his debut fighting Samanosuke Akechi in Onimusha: Warlords, as ordered by Guildenstern himself. Due to Samanosuke's persistence, Marcellus is eventually vanquished, and his warrior orb of wind, Arashi, retrieved by Samanosuke. Nonetheless, he was resurrected again with new powers to fight Samanosuke at the entrance of the Demon World, but the samurai prevails once more.

Guildenstern creates and sends various demons to the human world, including Marcellus. During the Story-Mode, Marcellus past is revealed by Kaede to Keijiro Maeda at the Three-story Pagoda. Kaede finds more information on Marcellus, to which she tells Samanosuke at the Ancient Castle (Flame).

During the events of Onimusha 3: Demon Siege, Marcellus is revived again, but he is much weaker compared to his former self. He's encountered twice by Jacques Blanc, who he tries to stop from reaching the new Gemna Lord Oda Nobunaga, but is eventually defeated in battle. 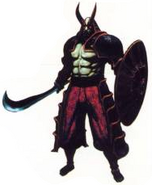 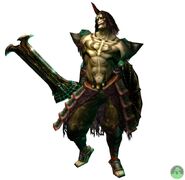