Mitsuhide Akechi was a general of Nobunaga Oda, and an uncle of Samanosuke Akechi. He is also the father of Gracia Hosokawa

While Samanosuke was missing for ten years, Mitsuhide reluctantly pledged allegiance to Nobunaga, rather than allow his family and his clan to be massacred by the Genma. But Mitsuhide had also employed Kaede as his agent to search for Samanosuke. During the events of Onimusha: Tactics, he assisted the Oni warrior, Onimaru and his rag-tag team of warriors on their quest to stop the revived Nobungaga. In 1571, Kaede located Samanosuke and both returned to assist Mitsuhide, but they did so in absolute secrecy.

In 1582, Mitsuhide and the Akechi clan rebelled and attacked Nobunaga at Honno-ji with help from his nephew, Samanosuke, and the new Oni warrior, Jacques. Some time after the death of Nobunaga at Honnoji Temple, Mitsuhide faced retaliation from Hideyoshi Toyotomi and died fending off the warlord's army.

Mitsuhide on his horse. 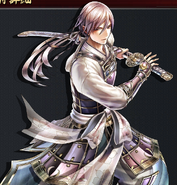 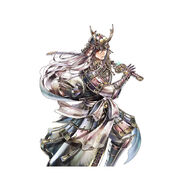 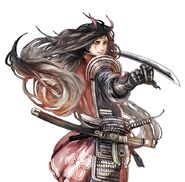