Ohatsu (お初) was the daughter of Nagamasa Azai and Oyu, making her niece of Nobunaga Oda alongside her sisters Yodo and Oeyo. She is an expert marksman, with techniques similar to her mentor, Magoichi Saiga. Ohatsu uses a wide variety of firearms as well as explosives and a grapple hook. Her alternate costume is Chun-Li Xiang.

As a servant of Hideyoshi, Ohatsu served as a mediator between the Toyotomi clan and the Tokugawa clan. Friends since childhood, Ohatsu holds intense feelings for Hideyasu Yūki and was troubled when he left Hideyoshi. Since the birth of Hideyori to her older sister, Ohatsu has been very troubled by the change she has noticed in the two.

Ohatsu is first seen in the game with Munenori, watching Hideyasu from afar as he burns down the Genma Trees that one of Hideyoshi's generals had been transporting. She is then seen again after Hideyasu, now joined with Jūbei Yagyū, infiltrates the fortress at Suruga. She tries to convince Hideyasu to give up his resistance against Hideyoshi and come back with her, but he refuses. After he defeats her, he asks her to come with him, so they can be together, but Munenori interrupts and stops her.

She appears again, rescuing Hideyasu from a cave, after he and Tenkai Nankobo had been trapped inside. She then asks Hideyasu what exactly Hideyoshi is planning on doing with the Genma Trees. Hideyasu reveals Hideyoshi's plans to turn everyone into Genma, and Ohatsu concludes that it is Mitsunari Ishida who is controlling Hideyoshi as he started to act strangely after Hideyoshi approached him about the Genma. The two of them climb the top of the castle, but as they are near the top, they are stopped by Munenori again. He forces Ohatsu to return to him, or else he will tell Hideyasu a secret that only he and her know. After Hideyasu defeats Munenori, he demands that Munenori tell him why he has Ohatsu follow him, to which Munenori only leaves behind puzzling words.

After Hideyasu fights Hideyoshi for the first time and is defeated, Ohatsu joins Hideyasu after he is nearly killed by Hideyoshi's powerful blasts. The two then head for Mt. Hiei, as Tenkai had ordered them. As they are traveling, Ohatsu begins to feel weak, and it is discovered that she has been infected with Genma Insects. This explains why she was following Munenori, because he could activate the insects whenever he wanted, instantly destroying her humanity and turning her into a Genma. Minokichi advises Hideyasu to kill her before she becomes a Genma Tree, but he refuses.

Arin arrives and reveals she can be saved after Hideyasu becomes an Onimusha. As he completes the trials, he hurries back, but runs out of time. It is at this time that Ohatsu has now become a full Genma, and is about to kill Minokichi and Arin. However, Hideyasu breaks through the wall seperating this world from the Oni World and fights Ohatsu one more time. Using his power, he removes the insects from her body, saving her. She then joins Hideyasu in fighting Hideyoshi and destroying the Genma.

Near the end of the game, she is the one who faces Ophelia, and manages to defeat her. After Hideyasu sacrifices his life to destroy Genma Trees, Ohatsu later married her cousin Takatsugu Kyogoku and helps Yodo take care of Hideyori. However, though married and wealthy, Ohatsu never forgets her first love. 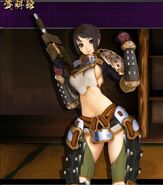 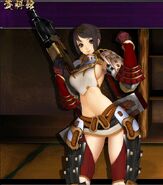 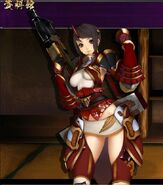 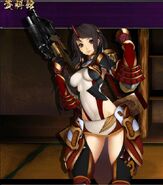