"So... Fortune has smiled upon me this day. With the power of this gauntlet... I will destroy all those monsters and save the princess!"
--Samanosuke Akechi

The Oni Gauntlet is a powerful piece of equipment bestowed to those that fight for the Oni. The first occasion of the Oni giving a gauntlet is Samanosuke Akechi. This first Gauntlet is given to Samanosuke after he is momentarily defeated by Osric. The Oni Council decide to give the power of the Oni to him in order to combat the Genma. In Onimusha: Warlords, a note written by Sougen Osho, it's called by its Japanese name, an "Ogre" Gauntlet, but for the rest of the series it would be called the "Oni" Gauntlet.

In Warlords it's revealed that the Oni Gauntlet contains a dragon's orb, the Oni Gauntlet also grants the wielder ability of utilizing various Dragon orbs, these orbs allow the wielder to utilize different weapons that take on various forms and elements granting power to wielders of the Oni powers. The Oni Gauntlet seems to also give the wielder mastery over the weapons the Dragon Orbs grant, evident when Jacques Blanc who didn't have any experience wielding whips or spears due to his training as an anti-terrorist unit which is focused on firearms.

The Oni Gauntlet also allows a wielder to easily kill demons compared to those without the power of the Oni. Which is Evident with both Samanosuke and Jacques failing to kill demons effectively before bestowed with the gauntlet's power, only barely harming them such as the case when Samanosuke fails to kill the Ninja genma, and Jacques when he's shooting his P90 against evading genma.

However it is also revealed that a human can become part Oni obtaining these powers, in the case of Jūbei Yagyū due to his mother, this allowed Jubei to kill the Genma at his village without the need of a gauntlet and can swap between Oni weapons without the need of Dragon Orbs.

The Oni gauntlet also can revive the wielder and grant additional power if the wielder's life is in extreme danger or risk of death. This occurs when Samanosuke is being crushed by Fortinbras and he changes into a Oni himself and finishes him off. This occurs in Onimusha 3: Demon Siege if any Samanosuke or Jacques are fatally injured their gantlets will glow purple before transforming either of them into a Oni granting immense power for a short time before returning to normal without serious repercussions. It can also be used to revive another fatally wounded person, however this will forcibly destroy the dragon orb and render the Oni Gauntlet lost along with it's power, this occurs when Jacques heals his son's Henri fatal wounds from Ranmaru in his Genma form.

Central to the first and third major chapters of the franchise (and to a lesser extent, the fourth chapter) is what is known as the Oni Gauntlet. This is the Gauntlet that was given to Samanosuke Akechi in and was created by the power of the council of the twelve Oni Gods. It absorbs souls (see Nature of Souls), gives power to Samanosuke's weapons and changes the color of the orb in its center to match with that of the corresponding weapon, allows him to achieve an Oni Awakening, and is capable of functioning with other Oni items such as the Oni Army Orb.

Jūbei Yagyū's mystical parentage through Takajo enabled him to use Oni power without the need for the Gauntlet. This was also repeated with Soki, who was revealed to be the reincarnated Oni God of Darkness. On the other hand, while Samanosuke and Jacques Blanc both had Oni Gauntlets, only Samanosuke could become the Ultimate Onimusha. It is likely that Samanosuke was chosen by the twelve Oni gods enabling this, while Jacques was granted power by only one of them, because of this he was only able to transform into one form. Additionally, Jacques' gauntlet began with a red sheen, turning to gold as it gained more power.

In Onimusha: Blade Warriors, while shouting at Marcellus in the Ice Chamber, Guildenstern talked about the Genma having a Gauntlet.

In Onimusha 3, Samanosuke had been sent to modern Paris and thus his Gauntlet had reverted back to its original bluish color and all of his previous weapons (Raizan, Enryuu and Shippuu) were lost since he was in a different timeline. However, he was able to restore his Gauntlet to its true potential by reabsorbing more souls and finding Dragon Statues that were hidden in the future, allowing Samanosuke to obtain new weapons (namely Tenso, Kuga and Chigo). Later, he was able to fuse the power of his Gauntlet with the Gauntlet of his alternate deceased self when he returned to a slightly alternate timeline. This gave him two gauntlets, thus allowing him to achieve his Ultimate Onimusha form.

After defeating Nobunaga Oda, he absorbed the Genma Lord's souls. Unlike the souls of other Genma, these were a dark-hollow, green color that gave the Gauntlet and its gem a dark red sheen. This symbolized that the gauntlet had sealed away the essence of the Genma Lord. This was also the reason he had to seal the Gauntlet away. Years later, as the God of Darkness was reincarnated as Soki, Samanosuke lost most of his power as the Onimusha and thus the Oni Gauntlet lost all its potential, turning his hair grey within a short period of time after losing part of the Oni Mystic Power. The only power that remained in the Oni Gauntlet was the sole power of the Genma Lord retained from Nobunaga.

In the fourth game, Tenkai/Samanosuke utilized this power against the Genma Army and even achieved an Oni Awakening with it, before it was transferred to Soki. At that point, Nobunaga's power was unsealed in the final duel against the resurrected Fortinbras. This Oni Awakening was a result of the Genma Lord's power since that was the only power left in the Gauntlet, explaining why he wasn't able to use the same moves or the same weapons that he did in the previous games.

Sougen's Note about the Gauntlet and the "Ogres"

Samanosuke's blood spills on the eye of the Gauntlet 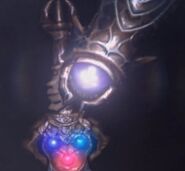 The Oni Gauntlet in the teaser trailer 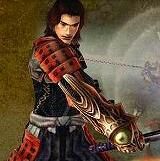