Onimusha: Warlords, released in Japan as Onimusha (鬼武者?), is the first action-adventure video game of the Onimusha series, released first for the PlayStation 2 in January of 2001. It was originally planned to released for the Playstation 1. Later it went through many changes and was released as Genma Onimusha (幻魔 鬼武者?) for the Xbox in 2002. The game was also ported to Windows as Onimusha: Warlords, although this version was only released in Asia and Russia.

A remaster was released in Japan on December 20, 2018, on January 15, 2019 it was released world wide for the Nintendo Switch, PlayStation 4, Xbox One and Steam.

The player begins the game with a standard katana sword, and can also obtain long range weapons with limited supply. However, as the player progresses, Samanosuke Akechi can gain three elemental weapons: Raizan, Enryuu and Shippuu, each with an elemental magic attack. As enemies are defeated, they release different coloured souls that are absorbed by using the demon's Oni Gauntlet on Samanosuke's wrist: red souls act as "currency" which can be used to upgrade weaponry, yellow souls recover health, while blue souls recover magic power which is used to perform each weapon's elemental abilities.

Some sections are played with Samanosuke's assistant, Kaede, who has her own array of weapons and abilities, but is unable to absorb souls.

The story begins in 1560 with a cinematic sequence set during a Battle of Okehazama between the forces of Imagawa Yoshimoto and Nobunaga of the Oda clan, Samanosuke of the Akechi clan watches but is attacked by Yoshimoto's men. As Oda clan's victory seems imminent, Nobunaga laughs until a stray arrow pierces his throat. A year later in 1561 Samanosuke receives a letter from his cousin Princess Yuki of the Saitō clan. In the letter, Yuki says that maids and servants have been disappearing and she suspects monsters to be the culprit and also request that Samanosuke saves her from the castle before she ends up as one of the victims. Samanosuke and Kaede arrive at the castle but they're too late to rescue Yuki. The last scene shows an army of Oda soldiers marching on with a pale but living Nobunaga leading them on a horse.

The game begins as Samanosuke and Kaede split up and head to the keep. Samanosuke soon finds some Genma creatures with an unconscious Princess Yuki. However, as the heroes have a brief reunion, a gigantic genma Osric emerges from the ground. Samanosuke attempts to defend Yuki, but is sent flying against the wall. As he lies unconscious, he is visited by the twelve Oni, who give Samanosuke the power to destroy the genma and absorb their souls with a mystical gauntlet.

Samanosuke wakes up and enters a cave, where he finds the Raizan. In a dry moat, he finds and kills Osric. Samanosuke then finds a laboratory and a genma scientist Guildenstern operating on a human. Guildenstern reveals that he has resurrected Nobunaga who then made a pact swearing his allegiance to the demons. Guildenstern escapes and sends a creature called Reynaldo, but Samanosuke defeats it and obtains the Enryuu in the laboratory. He then proceeds to a keep where he goes inside to find the entire place a derelict and encounters a man named Tokichiro Kinoshita wrestling with a young boy. After the boy escapes, Tokichiro states that he is a servant of the Oda clan and wonders if Samanosuke would be interested in joining, but Samanosuke refuses, saying that he controls his own life. As he moves on, Samanosuke sees Kaede chasing the boy and learns the boy's name is Yumemaru (Kaede later learns that he is an orphan and Yuki has raised him like a brother).

As Samanosuke nears the top of the keep, he sees Yumemaru in the hands of the enemy, however before he can give chase, Tokichiro confronts him once again with an offer to join the Oda clan. He also reveals that the dark ceremony involving a human sacrifice will take place soon and Princess Yuki's skull would be filled with her blood; Fortinbras, the king of demons, will bless it and Nobunaga will drink it in order to become powerful and destroy the Saitō clan.

Samanosuke defeats a strong genma Marcellus on the roof and receives the Shippuu. With this, he is able to rescue Yumemaru and brings him to a secure room in the keep. Samanosuke then tells Kaede to stay with Yumemaru and the woman while he looks for Yuki in the underground. While he searches, he finds himself once again in the presence of Tokichiro; with one last request to join the Oda clan, Tokichiro activates a trap device and Samanosuke is pulled down into the earth. Meanwhile, Kaede is rendered unconscious by a genma which looks like Samanosuke and Yumemaru is kidnapped by a woman. When she awakens, Kaede is led to the prison and finds Yuki locked in a cell. However Guildenstern arrives from the darkness of the cell and leaves Kaede to die at the hand of a powerful genma; she escapes once it is dead.

Samanosuke awakens and kills his counterpart in the underground passage. He makes his way back into the keep and arrives in the room where the woman and Yumemaru are. The woman reveals her true form, which is that of an insect-like genma Hecuba, and erects a door to the demon world which she flies into with Yumemaru. When Samanosuke faces her, she reveals that Yumemaru is to be killed in front of Yuki which will heighten her sorrow, thus granting Nobunaga even more power during the sacrifice. Samanosuke and Kaede eventually vanquish the insect genma. As Samanosuke makes his way through the demon door, he encounters Guildenstern who summons a more powerful version of Marcellus. After defeating him, Samanosuke makes his way into Fortinbras' throne room, where he finds Yuki and Yumemaru trapped on the upper level.

Before he can free them, Fortinbras enters the room: after a brief conversation, the two clash. It would seem that Samanosuke killed Fortinbras and he frees Yumemaru and Yuki as Kaede enters the room. As they exit, the place comes crashing down and Fortinbras finds the strength to grab Samanosuke. Kaede, Yumemaru, and Yuki escapes as the strain of Fortinbras's grip causes Samanosuke to spit up blood. Some of the blood falls on the gauntlet and Samanosuke becomes an onimusha (oni warrior) and finishes-off Fortinbras by stabbing him in his central eye. As Samanosuke transforms back into a human, he sees Nobunaga's reflection in Fortinbras' eye and the two stare at each other as the room continues to collapse.

During the ending sequence Yuki and Yumemaru follow Samanosuke's advice and travel the world. After the end credits, Samanosuke is seen alive, viewing Inabayama Castle from afar, and still possessing the gauntlet.

Genma Onimusha contained many changes from the original release. Besides the requisite minor graphical upgrade, there were various changes to increase the difficulty. Monsters are stronger and there are generally more of them throughout the game, but the most significant addition is green soul energy. Some foes release this when they die and the player must capture it before other monsters do. The player can gain temporary invulnerability, but the monsters become faster and stronger. Additionally, there is a new area, several new costumes, enemies limbs can be cut off by your weapon on certain conditions, some new cut scenes and a new super attack.

New Enemies in the Xbox version of Onimusha Warlords.

Ayame - A Genma doll. You can find her in the room where the Left Saito Crest is found. She will follow you throughout the rest of the game, sometimes taunting the player by laughing despite not being visible. The only she can be killed is by magic, charge attacks and normal attacks will not work on her.

Tower Guardian - A Oni warrior and Guardian, he awaits the player at the top of the Oni Tower, and can use 3 kinds of attacks, which mimic that of the players 3 magical attacks.

New Armor was added to the Xbox version of Onimusha Warlords.

Ninja Suit - A new Ninja Suit that Samanosuke gets in the Xbox version.

Metal Armor - A new Western Style Armor Samanosuke gets in the Xbox version.

Ogre Armor - The Ulitmate Armor that Samanosuke gets in the Xbox version.

Original version of the game was ported to PC by Capcom for the Asian market in 2003. Traditional Chinese version was released in Taiwan by Electronic Arts in late May,[1] and in Hong Kong by Typhoon Games on June 3.[2] Simplified Chinese version followed, released in Mainland China by Ubi Soft on July 8 under the title 幻魔鬼武者 (Genma Onimusha—same as Xbox version).[3] On December 7, 2005 localized version was also released in Russia by Akella with subtitle "Way of the Samurai" (Russian: Путь Самурая).[4]

The game came out on 4 CD's. It runs at the 640x480 pixels resolution and allows cutscene skip.

After release problems with Windows 98 and ME as well as with ATI graphic cards were reported and were later addressed with two patches.

The game contains many differences compared to the original. These include the ability to play the game in widescreen. When this is on the top and bottom part of the screen are cut and the camera zooms in. The backgrounds remains the same but are put through a filter to make them more smooth. When the player reaches the top or bottom edge of the screen, the screen will scroll to show the hidden view, giving it a cinematic feel. This was done because the original game was made to pre-rendered background at 4:3 resolution.

This game also has HD graphics running at 1440p resolution, and a framerate locked at 60fps. The most noticeable difference in the remaster is the completely reworked soundtrack. The original soundtrack was credited to Mamoru Samuragochi, but in 2014 news came out that he did not write the soundtrack for Onimusha and many other Capcom games, and the real composer was Takashi Niigaki. The new soundtrack is fully re-recorded with new arrangements. The Japanese audio was also re-recorded with Takeshi Kaneshiro reprising his role as Samanosuke.

A major change is with the controls. Player can now use the left joystick to control the characters freely, or use the D-pad if they are used to the classic tank controls. Players can also switch weapons during gameplay with a button, and no longer needs to go to the options to change weapons. Achievements set by Capcom, giving you an extra challenge to complete special in-game tasks.

Samanosuke, his name being a title at the imperial court, is Hidemitsu Akechi. He happens to be the nephew of Mitsuhide Akechi and aided his uncle in the death of Nobunaga at Honnoji Temple as depicted in Onimusha 3: Demon Siege. In real life, Samanosuke outlived his uncle and died either against a vengeful Hideyoshi's troops or by committing seppuku after murdering his family to spare them from retaliation. Historically, used to explain how he aligned himself with the Genma, Nobunaga was actually mistakenly reported to have been felled by an arrow during the Battle of Okehazama. 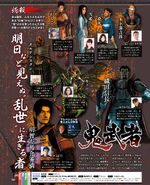 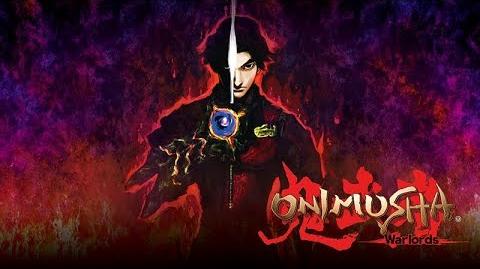