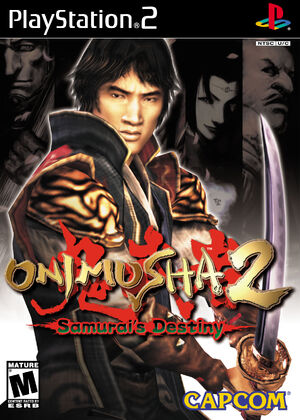 Onimusha 2: Samurai's Destiny, released in Japan as Onimusha 2 (鬼武者2, Onimusha Tsū?), it is the second installment in the Onimusha video game series released in March of 2002 for the PlayStation 2. The plot revolves around a new protagonist, Jūbei Yagyū (柳生 十兵衛, Yagyū Jūbē?), as he battles a demonic Genma army which is invading Japan. Nobunaga Oda, a sinister warlord who was slain in the previous game, has been resurrected and placed at the head of the Genma forces. Apart from the main character, the game features four playable sub-characters, each of whom shares a part in the story. The player's actions determine which characters will decide to help Jubei in his quest.

Samurai's Destiny features a control scheme found in many survival horror games published by Capcom, most notably Resident Evil. Other similarities include open-ended gameplay, the use of herbs and medicine to restore health, and the inclusion of puzzles which must be solved in order to progress. Hostile demons known as Genma inhabit most areas, and will attack and chase Jubei. Although the side characters of Samurai's Destiny are restricted to a single weapon, Jubei collects an assortment of short and long-range weapons throughout the game, including a bow and a matchlock rifle. Each of the characters can strafe and block forward attacks.

In order to discourage button mashing, the player is rewarded for performing "Issen" hits on Genma. Issen occur when the player initiates an attack the moment an enemy is about to lunge forward. A bright flash will appear if the move was successful, and the target enemy will die instantly. If a group of Genma surround Jubei, he will be able to chain several Issen hits together, mowing down the entire group.

In the beginning, Jubei's only means of defense is his katana; shortly into the game, he gains the ability to absorb the souls of defeated Genma (a recurring device in Onimusha games). This power is similar to that of Samanosuke's gauntlet in Onimusha: Warlords, and functions the same way. "Demons Souls" are most often seen emanating from the fallen corpse of a slain Genma, and appear as glowing orbs that float in midair. Jubei can attract any orbs in the vicinity and draw them into his hand, provided that he is standing close enough.

Demons Souls are differentiated by the color of the orb: the most common type, red orbs, act as experience points which can be spent to improve Jubei's weapons and armor. Yellow orbs will restore a character's health. Blue orbs recharge magic ability. The rarest variety is the purple orb, which differs from the others in that it appears less frequently, and is much larger. When Jubei absorbs five purple orbs, he temporarily powers up into an "Onimusha", increasing his attack damage and becoming invincible. The transformation wears off after a few seconds, after which Jubei's stock of purple souls is depleted.

Samurai's Destiny features a gold mining town called Imasho which is totally free of enemy encounters. Onimusha 2 introduces several role-playing elements into the series; the first is the option to improve Jubei's attack, defense, and speed, by upgrading his gear. Secondly, in the areas surrounding Imasho, defeated Genma often leave behind piles of gold which can be spent on gifts for other characters.

Several years have passed since the death of Fortinbras, Nobunaga Oda has taken command of the Genma as he continues his campaign to unite Japan while wiping out any threat to his power. Among the villages he targeted is the Yagyū clan village. The clan's only survivor, Jūbei Yagyū, who was away at the time of the Genma attack, finds the destroyed village and goes to search for the culprit. He encounters a female Oni named Takajo who explains Nobunaga's actions. Revealing herself as Jūbei's mother, Takajo unleashes Jūbei's Oni powers and tells him to search for five orbs that were created to protect humans from demons. Jūbei then embarks on a quest to find the orbs in order to defeat Nobunaga.

Across his journey, Jūbei meets several warriors who become his allies, with each of them having their own story arc. These characters are Ekei Ankokuji‎, a master spearfighter in the Houzouin style who used to serve a feudal lord a long time ago but left after losing a battle against Nobunaga's forces. He also lost his daughter when his castle was burnt in the battle. He wishes to become a feudal lord and will do anything to achieve his dream. Fūma Kotarō, a ninja who distrusts women after his mother abandoned him, meets Jubei and helps him in his quest to defeat Nobunaga, as well as to uncover the mystery behind Oyu. Magoichi Saiga, the leader of the "Saiga Ikki" gun troop in Kii Province, is on a quest to kill Nobunaga because he fears Nobunaga will one day eventually attack the village that raised him. Oyu of Odani, a female warrior who is secretly Nobunaga's sister, Oyu, and wishes to stop her brother. She is the love interest in the game and reveals to Jubei that she has a husband, but she left after finding out that her husband had daughters from a previous marriage.

Jubei also encounters several Gemna serving Nobunaga including the arrogant yet noble swordsman Gogandantess; Ginghamphatts, a giant, semi- arachnid genma; and Jujudormah, a female genma who kills Takajo and is obsessed with Nobunaga. With help from his friends, Jubei defeats his enemies, including the forces that were going to attack Odani Castle. He goes to Nobunaga's base in Gifu Castle after stealing a ship from Nobunaga's servant, Toyotomi Hideyoshi. Having already obtained all Five Orbs, Jubei bids farewell to his comrades, with Kotaro sacrificing his life to save Oyu during the final battle with Jujudormah, Ekei getting accepted to serve a feudal lord, Magoichi leaving to his village to prepare for battle, and Oyu returning to her home after Jubei tells her that Nobunaga is still her brother and she cannot kill him, as well as the fact that she still has a husband at home waiting for her. Jubei faces Nobunaga alone. During his final battle with Nobunaga, Jubei unleashes the might of the Five Orbs to enhance his oni powers, and defeats Nobunaga.

However, unable to be destroyed since Jubei does not possess the power of the oni gauntlet that Samanosuke has, Nobunaga's disembodied spirit vows to return and Jubei escapes from the collapsing castle into the night. The follow morning Jubei is shown sitting on a horse at the edge of a mountain overlooking a castle in the distant. It is shown that Oyu resides there with her family.

During the Imasho Town sequences in the game, Jubei can buy goods from merchants and give them to any of the four sub-characters (Ekei, Magoichi, Kotaro and Oyu). Reactions to a present will depend on that person's temperament; giving Oyu a bouquet of flowers will make her happy, whereas giving it to a male recipient will simply irritate them. Jubei's gift-giving will determine which warrior will assist him as the game progresses, and will in turn influence the story. In some cases, if the player fails to win a character over, that person will opt to shun or betray Jubei later on.

At certain points in the story, control may be passed to another character for a short period. These side-quests often begin with Jubei finding himself ambushed, trapped, or incapacitated, requiring one of his allies to help him. During these events, the sub-character can equip a bracelet which imbues them with the same soul-absorbing power which Jubei wields. Because this power is essential to gameplay, treasure chests containing bracelets are usually found in plain view as soon as the side quest starts.

As in the previous game, Jubei is able to use magic by wielding element-based weapons. The first one that Jubei receives is the Buraitou, the Thunder Sword, a blade that channels lightning. During the course of the game he may acquire weapons with different properties such as Hyoujin-yari the Ice Spear, Senpumaru the Wind Naginata, Dokoutsui the Earth Hammer, and the Rekka-Ken (a Fire-based broadsword). When wielding these weapons, Jubei can perform a stronger elemental attack at any time.

In addition to his life bar, Jubei also has a meter which measures his magic ability. The meter dwindles each time Jubei casts a spell, but can be restored by absorbing blue Demon Souls.