Onimusha 3: Demon Siege, released in Japan as Onimusha 3 (鬼武者3, Onimusha Surī?), is an action-adventure game developed and published by Capcom. It is the third game of the Onimusha series and was released for the PlayStation 2 on April 27, 2004. It was later ported to PC Windows on December 8, 2005.

Having returned from mastering his new found abilities as an Onimusha, Samanosuke Akechi returns to battle the Genma army in Japan 1582 as he fights his way to Honnō-ji Temple to finally put an end to Nobunaga Oda. Though Samanosuke defeats Nobunaga's ward Ranmaru Mori, he ends up being pulled through a portal that opened below him. Samanosuke awakens in Paris in the year 2004 where he aids a man named Jacques Blanc in fighting the Genma army that has begun its invasion near the Arc de Triomphe. The time portal reappears and pulls Jacques and Philippe through to feudal Japan. Samanosuke then meets Michelle Aubert, Jacques' girlfriend, near the Arc and makes his way towards the roof. Across his fights, Samanosuke briefly meets an old enemy: The Genma scientist Guildenstern. Guildenstern explains that he developed the technology to enable himself and his fellow Genma to travel through time to conquer the future.

Jacques Blanc and Philippe arrive in 16th century Japan. However, Philippe dies of mortal wounds from the previous battle after the time warp. Upon arriving, an Oni spirit grants him powers in order to assist him on his way to Honnō-ji Temple in Samanosuke's time. The Oni also gives Jacques a spirit named Ako to assist him in his quest. To return to their own time period, Samanosuke and Jacques must save the respective timelines they are in from destruction. The Samanosuke in 2004 Paris teams up with Michelle and Jacques' son Henri Blanc to save the city from destruction while Jacques and the past's Samanosuke struggle to fight Nobunaga in feudal Japan. Across his journey, Jacques and the past's Samanosuke meet Tadakatsu Heihachiro Honda who is linked with the Oda clan. However, Heihachirō decides to join Samanosuke and Jacques' cause. The future Samanosuke also encounters the Ranmaru who was also displaced and turned into a Genma warrior.

Following several battles, Samanosuke manages to defeat the Genma forces from the future by defeating Guildenstern and Ranmaru. Heihachirō is killed by the past's Ranmaru and Jacques avenges him when reaching Honnō-ji Temple. Although Nobunaga appears to be defeated as Jacques returns to his time, his Oni powers passing into Henri to save the boy's life, the warlord recovers and kills the past Samanosuke. However, upon his return to his time, Samanosuke absorbs his alternate self to assume his Onimusha form and defeat Nobunaga before sealing the warlord's soul in the Oni Gauntlet. Samanosuke then starts a journey with Ako to seal his Gauntlet to ensure Nobunaga can never return. But Nobunaga's death enables his former vassal Tokichiro to begin his own conquest of Japan as Hideyoshi Toyotomi with the Genma now supporting him.

In the Midst of the Genma invasion, to the top of this famous arc is where Samanosuke must go to face Guildenstern and his new brainchild, Brainstern.

Beneath this holy place of worship, the Genma have built a huge underground fortress for Guildenstern.

This Monastery, In Normandy, has been used by the Genma in the Past, and future. In the Past, Vega Donna uses the place to power up her new flying Azuchi Castle. In the future, it is home to the time folder. The whole place gets destroyed in the past and future, by the flying castle in the past, and by the exploding time folder in the future.

This famous monument is the new home of the Time folder. Samanosuke must venture to the summit and face Ranmaru for one last time.

Aside from the three weapons from the original Onimusha, Samanosuke and Jacques find eight other weapons:

Onimusha 3 is the first game in the series to introduce the usage of analog sticks as well as the D-pad to control the character's movement. Also the first in the series to use real-time rendered 3D environments instead of pre-rendered backgrounds. Both the intro sequence and Samanosuke's sword-combat motion was captured and choreographed by famed Hong Kong movie actor Donnie Yen.

Although Capcom stated on several occasions that Onimusha 3 would be the end of the series, the ending indicated another game revolving around Toyotomi Hideyoshi (Nobunaga's successor) and the sealing of Samanosuke's Oni gauntlet. A new Onimusha game, entitled Onimusha: Dawn of Dreams, was released in early 2006 and in which Hideyoshi was the central villain. 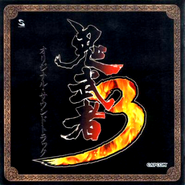