Ophelia is the very last member of the Genma Triumverate. She currently holds the title of 'the Priestess' and is a boss enemy encountered in Onimusha: Dawn of Dreams.

Ophelia was a concubine and priestess charged with watching over the Genma. She was also the most feared member of the Trimpvirate because her witch-like powers exceeded that of Claudius and Rosencrantz. Two of these powers was enslaving other peoples minds with a mysterious mask, and being able to shape shift her form at will, often deceiving her victims. She also nurtured and cared for younger species of genma until they were fully matured.

When the great war came between the Genma and Oni, Ophelia was struck down with the rest and banished to the netherworld along with Fortinbras.

In Dawn of Dreams, Ophelia is nurturing and caring for the Genma Seed for the God of Lights rebirth that is implanted in Hideyoshi's chest. Rather than possessing a human host unlike the other two members of the Triumpvirate, Ophelia kills her chosen victim and uses her powers to change her form into them instead. At the ruins of the destroyed village, she deceives Ohatsu by taking on the form of her older sister, Yodo. She is quickly revealed to be a Genma, though, and the party manages to defeat her while she summons other Genma to fight for her.

She then reveals her true form, which is completely different from the other two. It is unique due to the fact that rather than being a complete insect, Ophelia appears as a human female merged with a moth. She is defeated, but is revived by the essence from the Omen Star. She makes a final appearance at Osaka Castle and is gravely wounded by Ohatsu. She manages to stagger all the way to the castle and use the Genma seed to summon the God of Light. She is unable to finish the ritual, however, and is killed by Yodo for good, who has been sacrificed and reborn as the Genma Mother Tree. She was also the lover of Fortinbras, but was unable to carry his seed. Because of this, they had to implant the seed in the chest of Hideyoshi instead of in her own child. 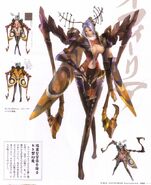 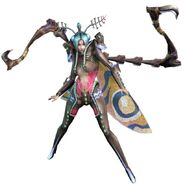