Oyu (Oichi) of Odani was the sister of the infamous Nobunaga Oda, and the wife of Nagamasa Azai until the latter's death.

Historically, she never met Jūbei Yagyū, but she did join in the fight against her overlord brother with her husband - Azai Nagamasa rather than Jūbei, but she later joined Hideyoshi Toyotomi.

In the game, she is first seen by Jūbei in the town of Imasho, where he fends off three men whom are hitting on her before heading to the Imasho Mines. Jūbei later finds her in the clutches of Tokichiro (the future Hideyoshi Toyotomi) and rescues her (however her stepdaughter Yodo will later go on to become his concubine and the mother of his heir). Jūbei joins Oyu's fight to secure the territory of the Azai. Oyu then assists Jūbei in his battles against Nobunaga's armies as well.

Over the course of her journey, Oyu begins to fall for Jūbei, as seen on their ride back to Imasho on the Oni Horse and other instances. Oyu is always present to assist Jūbei whenever she can, a sign of her latent affections toward him. Oyu is also emotionally conflicted between her duties and her feelings for Jūbei as the story progresses.

When both she and him are trapped by Tokichiro in an underground pit, she reveals to Jūbei that she is actually Oichi, wife of Nagamasa Azai and the sister of Nobunaga. Oyu then explains her reasons for being caught at Gifu Castle: she planned on assassinating Nobunaga, due to his malicious intentions of destroying the Azai clan and conquering Odani. Oyu also reveals to Jūbei that she felt betrayed when she learnt from Nagamasa - two years after they were married - that he already had three daughters from his previous marriage.

Oyu then tells him that nothing mattered to her after that until she met Jūbei. Oyu then thinks of herself to be selfish because of her statement and becomes set on returning to Odani in order to protect her stepdaughters. Overcome with emotion, Oyu embraces Jūbei and the pair almost share a kiss, but Tokichiro interrupts with a blast to the pit, opening yet another path to lead them out of their prison. Oyu falls into a hole, and struggles to escape, when Gogandantess unexpectedly rescues her stating "It is quite natural for men to rescue weak women." After Jūbei defeats Gogandantess, the both of them escape the island, making it onto Tokichiro's flying airship, the Oni Genbu.

Jūbei and Oyu soon wipe out Nobunaga's armies near Odani Castle using the Oni Genb and then return to Gifu Castle where her brother was located. Oyu and Jūbei are then separated when the Oni Genbu crashes into Gifu Castle. Jūbei jumps out safely, but Oyu does not, making Jūbei believe her to be dead.

Before heading down to face Nobunaga, Jūbei and Oyu reunite for the last time. With very few words exchanged, Jūbei then convinces her not join him on his final battle against Nobunaga, reminding her that he is still her brother and cannot be involved. Oyu stops him before heading inside the elevator, trying to confess her feelings to him, but just smiles sadly at him. Jūbei then pulled her to him and they finally share a memorable kiss before he departs to face Nobunaga. The last words Jūbei said to her were "I hope you find happiness." Oyu is then left at the elevator as she watched Jūbei descend to her brother's lair. After he disappeared from sight, she collapses and cries, eventually returning to Gifu Castle.

Oyu steering the Oni Genbu away from Odani Castle.

Jubei with Oyu after Tokichiro escapes onboard the Oni Genbu.

Artwork of Oyu from Onimusha: Soul 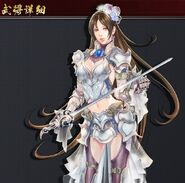