Ranmaru Mori was one of Nobunaga Oda's Generals and also the head retainer to the Oda family. He makes an appearance in Onimusha 3: Demon Siege.

Ranmaru is first encountered at Nobunaga's side in Honnoji Temple. He attacks Samansouke but he is easily brushed aside, wounded and knocked unconscious. Just as Samanosuke is about to face Nobunaga, he is caught along with Ranmaru by a time rift and is acidentally whisked off to the future of Paris in 2004.

The future Ranmaru is very different from the regular Ranmaru, however. He has been corrupted by the Genma and transformed into a horrific mutation of his former self. Samanosuke struggles to face him in this battle because he has also gained incredible demonic power and strength. When he is defeated, he utters to Samonosuke that he is still trying to 'fight off' the mutation that has taken over his body. It may be possible that he was captured by Guildenstern and infused with Genma blood, giving him his new found power. Another theory, is that Ranmaru may have accidentally steped into a Genma transforming machine, causing his mutation, as Samanosuke also becomes trapped in one after he defeats Gertrude.

In the final battle with Samanosuke, Ranmaru is defeated up at the top of the Eiffel tower and is finally killed by Jaques at Honoji temple, as his regular self. 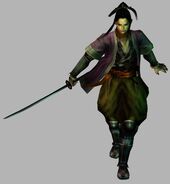