The Secret Scrolls are one of several technique scrolls found throughout Onimusha 2: Samurai's Destiny. They are technique scrolls that contain a combo attack for each oni weapon: Buraitou, Hyoujin-Yari, Senpumaru and Dokoutsui.

The item is located in the Gold Mines. The mine splits into two paths at the Magic Mirror. Take the shorter path to the left that quickly turns into a dead end. Take the Demon Wall Scroll from the item box and search the back of the room for a trick treasure box. You have two moves to open this box so press the right-bottom arrow and the bottom-left to complete the pattern. Inside is the Buraitou Secret Technique.

The item is found in the Gold Mines, at a dead end past the hatch leading to Castle Gifu. It is inside wooden crates, locked in a trick box. You have four moves to open this box and claim the Hyoujin-Yari Secret Technique scroll. Start with the bottom-right arrow then the right-top followed by the bottom-left then the right-bottom to complete the puzzle.

Located at Fog Valley, head through the large double doors and move around to the west end of the compound to find a trick box. Click the bottom-left arrow followed by the right-middle arrow to open this box and claim the Senpumaru Secret.

Found at Castle Gifu, After breaking the seal, enter and solve the trick box to get the Dokoutsui Secret. Six moves are needed to unlock it: right-bottom, bottom-right, bottom-left, right-middle, bottom-middle, and right-top. 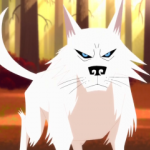