Tadakatsu Heihachiro Honda was a secret servant to Lord Ieyasu Tokugawa, one of Nobunaga Oda's generals. Highly loyal Ieyasu, he displays tremendous intellect and skill in battle. He has shown such skill on the battlefield that it has been said that "only two things have surpassed Ieyasu - the head of the Tang(dynasty), and Heihachi Honda. " He has a very disarming personality. His special weapon is his Famed Dragonfly-Slicing Spear with which he can perform the Demon Dragonfly Slice by harnessing the power of the demons.

Honda helps Samanosuke Akechi and Jacques to defeat Nobunaga Oda. In the final stages of the game, Tadakatsu is caught in a trap at Azuchi and killed by Ranmaru Mori who discovered his treachery. Tadakatsu can be playable when completing the game once and select 'Tales of Heihachi'. In 'Tales of Heihachi", Heihachi actually sought Samanosuke out so that he can put a stop to the Genma. He helps fix a major gate in Sakai which help keep the Genma away and slaughters the remaining Genma with Samanosuke. 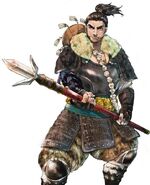 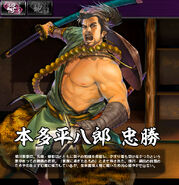 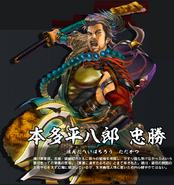 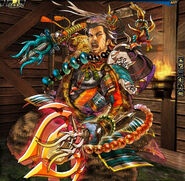 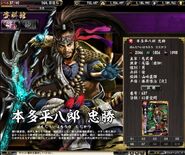